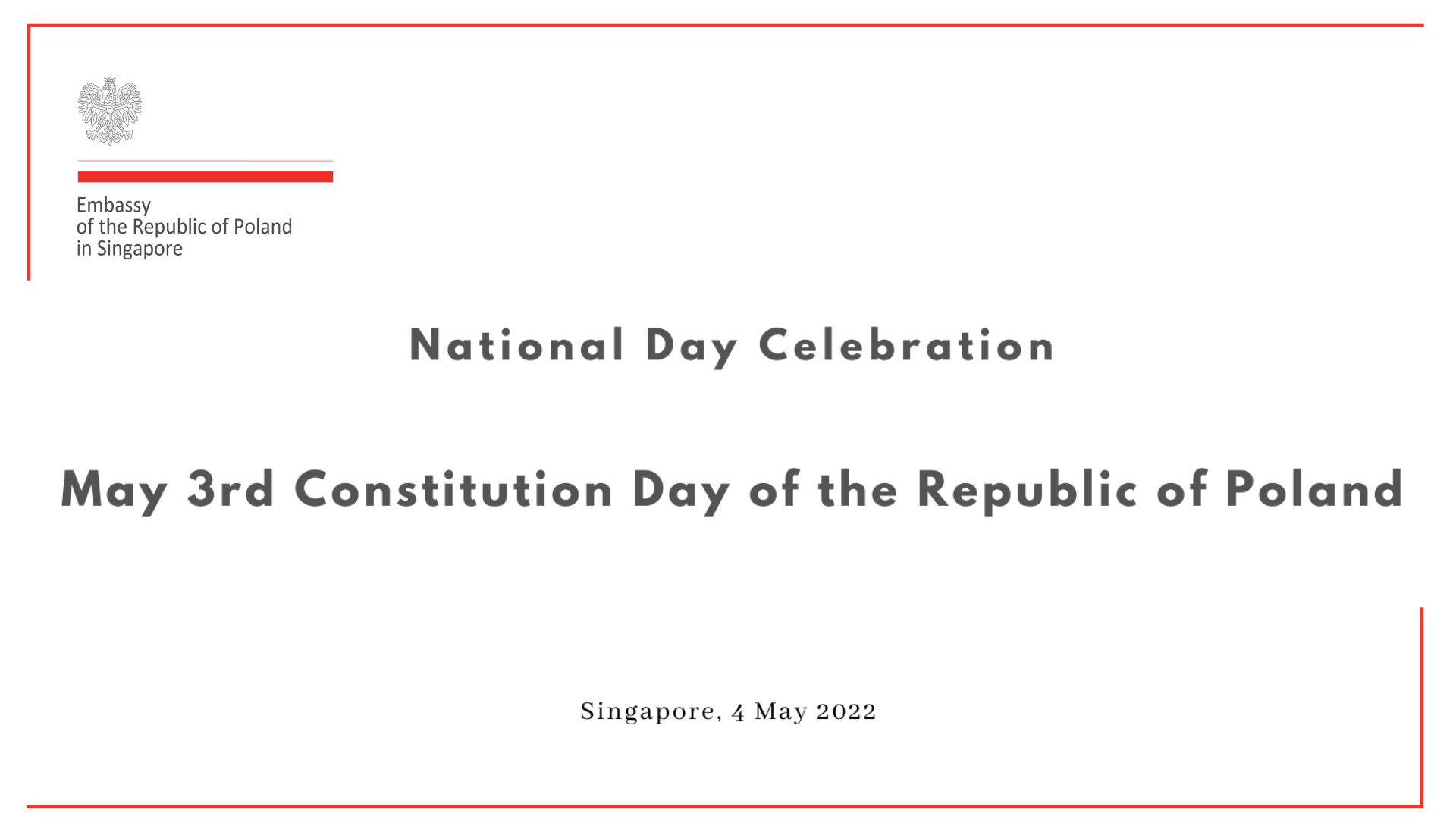 The Polish Embassy in Singapore has the pleasure to invite you to participate in the celebration of the Constitution Day, which will be held in a virtual form, on 4 May from 5 PM to 5:30 PM(SGT).

• Speech by the Ambassador of Poland to Singapore, H.E. Magdalena Bogdziewicz

• Speech by the Minister of State at the Ministry of Trade and Industry (MTI) and the Ministry of Culture, Community and Youth, Low Yen Ling• Last year’s photo summary of Polish cultural events in Singapore

• Performance of the winner of the 18th International Chopin Competition, Bruce (XIAOYU) Liu

A short history about 3rd May Constitution

When on 3 May 1791 the Four-Year Sejm also called the Great Sejm adopted The Government Act of the Polish–Lithuanian Commonwealth later known as the Constitution of 3 May, the Polish-Lithuanian state became Europe’s first and the world’s second that passed the basic law.

For its time, it was a progressive and bold legal act that initiated a number of reforms. It also constituted a crowning achievement of the centuries-old links between Poland and Lithuania.

The 3rd May Constitution introduced, among other things, the principle of the tripartite separation of power, and reformed the existing political system ensuring more equal treatment of all nationalities within the Commonwealth. It also expressed the nation’s will to defend Poland’s independence following its first partition by Austria, Prussia and Russia in 1772.

The Constitution of 3 May along with its complementary Reciprocal Guarantee of Two Nations adopted by the Great Sejm on 20 October 1791 also confirmed a closer union between the Polish and Lithuanian nations.

The act ensured, among other things, equal 1 to 1 representation at the Commonwealth’s shared state bodies for Poles and Lithuanians. We can proudly say that the leaders of the two nations and states, despite all differences, were able to work together effectively at a crucial moment for their existence. Such example has been inspiring cooperation and friendship between Warsaw and Vilnius to date.

Unfortunately, the ambitious reform plans which had been meant to be implemented based on the new constitution were shattered by the Russians’ armed intervention in 1792. As a legal act, the Constitution of 3 May formally ceased to be in force in November 1793 by virtue of the resolution by the Sejm that was summoned under the dictate of Russia and Prussia in Grodno.

On the same year, the two states partitioned Poland for the second time.

Finally, the Polish-Lithuanian state disappeared from Europe’s map for over 120 years after the 3rd Partition in 1795 conducted by Austria, Prussia and Russia. This act, violating all principles of international law, was erased only after World War I when Poland and Lithuania regained independence as two sovereign states.

When Poland regained its independence, the anniversary of adopting the 3 May Constitution was celebrated as a national holiday since 1919. Under German and Soviet occupation as well as under the rule of communist authorities in Poland, when the 3 May Day holiday was banned, most Poles continued to observe it. In the sovereign Republic of Poland, we have been celebrating May 3 National Holiday again since 1990.